On Saturday, October 6 2018, the US Senate confirmed Brett Kavanaugh as a new Supreme Court justice, replacing the moderate conservative Anthony Kennedy and, with a score of 5:4, tilting the Supreme Court ideologically to the right for the first time in decades. When Ruth Bader Ginsburg, a stalwart proponent of women’s rights, leaves office, the new status quo of 6:3 will be cemented for the next few decades in favor of conservative judges much stauncher than has been the norm thus far.

Why is that important? First of all, Supreme Court justices are appointed for life. Unlike the presidents, for whom it has been made difficult to enact quick changes during their term of office, the Supreme Court has the power to introduce radical change with a single strike of a gavel. For women, it could mean an overturning of the Roe v. Wade ruling, which would give states the right to decide on the legality of abortions. The Bible Belt, where cessations of pregnancy have already been criminalized, and access to birth control and abortions restricted, will certainly seize this opportunity with all ten of its hideous claws.

It’s being said that we’re in a culture war. That the neo-Marxist, postmodern, radical left is destroying the world; that Europe is facing grave threats; that one can’t flirt with women anymore; that Muslims are taking over; and that the political establishment has tipped dangerously leftward. All this is being blamed on universities, the youth, the snowflakes and the gays. And it’s being said that this is also happening in Estonia. I implore you — please, consider also the compositions of the Senate and the House of Representatives, then take pause for reflection and think about the ideological content of Estonian political parties. This should be followed by another pause for reflection and a look at the political map of Europe together with a chart outlining recent growth of radical conservatism in these parts. A minuscule spoiler — you won’t find in them any signs of the world being taken over by neo-Marxists. But I acknowledge that no-one can be bothered to exert themselves to that extent, so let me just write on. 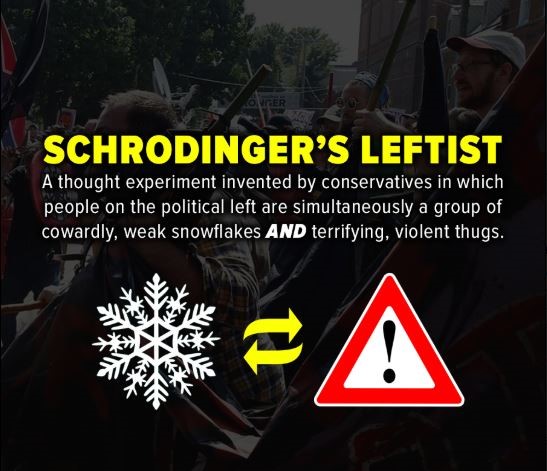 I am standing in the library of a great Estonian university, browsing through the philosophy section. I notice a sad, half-empty shelf in the left corner — the Frankfurt School (i.e., “the neo-Marxist root of all evil”). The enemy must be truly formidable, if it takes just three worn-out books to train up a whole army of cultural Marxists that’s about to take over the Estonian state… All right, all right, I’m obviously blowing things out of proportion here. The neo-Marxist critical theory is actually freely available for all on the internet, and clearly the left-leaning youth must be poring through all of it en masse, each and every one of them obviously understanding it all in exactly the same way.

The selection of feminist literature is quite a bit more sizeable, as there’s altogether four thin shelves’ worth of it. It seems feasible for this to be sufficient to mobilize all of the women pointlessly wasting their time in universities, as they will find Estonian men lacking, and, by foregoing motherhood, will refuse to properly serve their homeland. Let’s not forget that this clandestine global scheme has also led to the gays infiltrating all sorts of power structures in order to paint rainbows and wash children’s brains — despite the fact that they make up only about ten percent of the population.

I don’t want to gloat like that, but it’s truly appalling that the political discourse in Estonia has reached a point where even a moderate centrist will admit that we’ve gone into excessive, mostly leftist extremes. What are they talking about? Communism? Men being lynched? Universities spouting a postmodern doctrine? That’s a fantasy… or maybe a neurosis brought on by excessive drinking [1]. 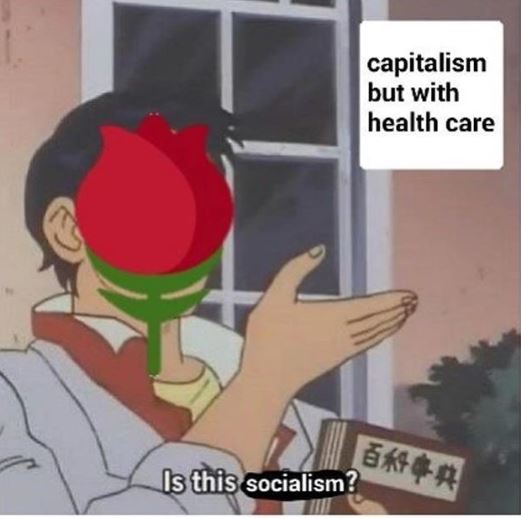 There are, at best, five armchair anarchists in Estonia, each one representing a different school of thought, each one either unfamiliar with or dismissive of the others, all of them staying out of politics. A lonely, burned-out communist may post a meme or two on Facebook once in a while, only to succumb again to hibernation lasting for 11 months of a year, more or less. A leftist party? What on Earth is that?

There are six parties — let’s call them “ducks” — to choose between in our Parliament. One of them does have a rather bright red beak, but don’t let that distract you, because, let’s not forget — if it looks like a conservative, and quacks like a conservative… that duck’s conservative! Consider the nature of social democrats in Germany, for example, and you’ll see what I mean. A liberal in Estonia is a conservative in the Western world, our whole political spectrum has shifted two notches to the right, and the actual left-wing alternative has either fallen asleep or emigrated.

Also, it would be quite a stretch to claim that the situation on the front of freedom of speech, a.k.a. freedom of offense in Estonia is in any way troubling. A politician can say whatever they like, as long as they’re targeting Russians, women and black people. They won’t let themselves be muzzled. Respect! The Minister of Justice can flip out and pen an article where he expresses regrets over condemning violence against women in the past. Center Party member of the Parliament Viktor Vassiljev can become emotional while addressing the Parliament, proposing that women who have children with irresponsible men should be sterilized[2]. Jürgen Ligi (Reform Party) has even invented his own dance — stepping down, then stepping up again. The National Conservative Party EKRE are the first political party since restoration of Estonia’s independence to clearly state their stance against abortion, and Ruuben Kaalep (EKRE’s youth faction The Blue Awakening) is welcome to spin racism into patriotism [3] at a public, open-air meeting. Mind you, EKRE is the most popular political party among Estonian men according to the survey made by Kantar Emor.

The #metoo campaign was suppressed in Estonia even before it could properly begin. Taavi Rõivas (Reform Party, former Prime Minister) travelled to Malaysia to open a shady business with a cool name, followed by a raunchy 90s-style party. Something must have gotten really out of hand there, as one of the women at the party later decided to tell the media that she was pushed and a hand was shoved up her skirt — that’s reportedly the censored version, concocted in order to spare loved ones. The woman’s testimony was followed by a fake apology from Taavi Rõivas, and a personal best of votes for him at the next local elections! If one were to believe the reactions to that in newspaper articles and comments sections, hundreds of men had already been crucified in Tallinn’s central square. In reality, that was the only confession to become public. At the same time, in a parallel reality, #metoo was such a devastating event that now no men can flirt with a woman without being labeled a rapist.

Unlike the Finns, the Latvians and the Lithuanians — not to mention the rest of the Europeans —, Estonians did not march in solidarity with the women in the rest of the world. Even the unbelievable bravery of the Polish women openly defying repressions by the state and the neo-Nazis fails to instigate Estonians. (Please, try to refrain from commenting about how every country has a right of sovereignty, and how the Nazis stopped existing after the year 1945.)

Estonia has a high threshold for evidence

The Attorney General Lavly Pering admits that the threshold for evidence is high in Estonia.  This means that it’s impossible for a victim of sexual violence — usually a woman or a girl — to demand justice by simply going to the police and making an official claim (i.e. lying, as everybody knows women lie constantly!). If there’s no DNA evidence or clearly visible injuries, your case is pretty much hopeless. On the other hand, we know that often there are no marks of violence, as it’s common for rape victims to freeze and mentally escape while being assaulted. And what am I even talking about here? Our boys don’t rape; they’re engaging in educational activities [4] in the woods!

Estonian universities don’t limit free speech, nor do they train up postmodernist warriors 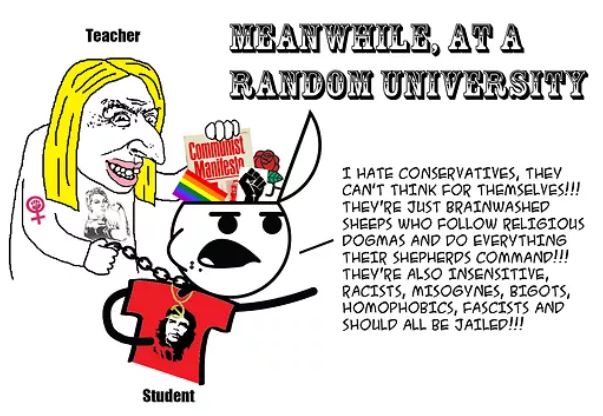 This is yet another cause for those worried about the dictatorship of political correctness in Estonia to breathe a sigh of relief. Life in the facilities of higher education is quiet and free from activism. One can be sure that, should something untoward happen, the reactions of the institutions will be lukewarm [5] at best.

In order to engage the attention of centrists, neo-Nazis and people flirting with neo-Nazi ideologies in the rest of the West have to encrypt their messages, which are communicated via memes, pictures, symbols and code words. Here, one can simply admit to being a racist and expect nothing but applause or a nod of acknowledgement in response. Anything other than straight talk just confuses Estonians. Dog whistles — what are those? If it’s black, send it back! Other political parties can’t be bothered to make much of a ruckus over such rhetoric, either, as EKRE are happy to cooperate with everyone else, which implies that their ideas are considered fit for public discourse.

If the radical left doesn’t exist, it must be fabricated. The US and parts of Europe are clearly moving towards a very illiberal, socially conservative ideology that’s characterized by reclusiveness, paranoia and anger. The internet does indeed give voice to the minorities and the radical left, but this should not be confused with real power, which is moving in the exact opposite direction. Just take a look around — you’ll have to admit that leftism hasn’t been this marginal in Estonia for quite a while.

* This article was written before the author noticed fashwave stickers in the street made by the EKRE youth organisation. It seems that Estonia does have room for both modern crypto-fascism as well as outright old school fascism. Also, there was a meme page in the crypto-fascist fashion the alt right creates in the US, but it disappeared quite quickly because the proper audience was not able to follow.

[1] In 2017, Estonians consumed 8,6 litres of alcohol per resident. According to the World Health Organisation, 6 litres per resident marks the rate where drinking is seriously harming the health of the nation.

[2] Originally it referred to an Estonian newspaper article. The politician delivered his speech to the parliament and angrily stated that careless women who have children with bad fathers should be sterilized.

[3] As the reader can see, the video has been removed because of hate speech. In that video a member of the Estonian Conservative People’s Party youth organisation delivered a speech where he declared himself openly a racist followed by applause

[5] This referred to an Estonian article summarizing ill behavior and unsavoury statements that had come to light in the University of Tartu and criticized the university’s lack of action, though acknowledged that some steps are indeed taken to better the situation.

On Saturday, the first Estonian feminist forum was held in Tallinn. Equal rights supporters from Estonia and neighboring countries recognized…
Petra de Sutter, 55, is a professor of gynaecology, head of the reproductive medicine department at Ghent University Hospital in…
Last week I attended the Estonian Women’s Studies and Resource Centre (ENUT for short) celebration of 20 years since the…
Cart
Checkout - €0,00