Recently, when I held a workshop about gender stereotypes in the media at the 2021 Tallinn Feminist Forum, the organizer Nele Laos and I thought it would be fun if I changed my diet for a week: from consuming my native Swedish news media to a strict diet of Estonian online news magazines.

The menu I was prepared consisting of the daily magazines Postimees, Õhtuleht and Eesti Päevaleht, the weekly magazine Eesti Ekspress, and the business magazine Äripäev. But before we get to my gender findings from the week, I have to admit: I have never been to Estonia. I’ve been to Finland, Russia, Latvia – all the neighbouring countries. But I’ve yet to set foot in Estonia. Since norms and gender roles are socially constructed, they’re of course also cultural. So, it’s entirely possible that I miss some nuances of, or completely misunderstand, some of the examples I’ve hand-picked below. But I welcome corrections.

With that out of the way, let’s look at what I learned about Estonian gender dynamics (or stereotypes) from reading Estonian news.

1. The feminine vs. masculine way of using a barrel hot tub 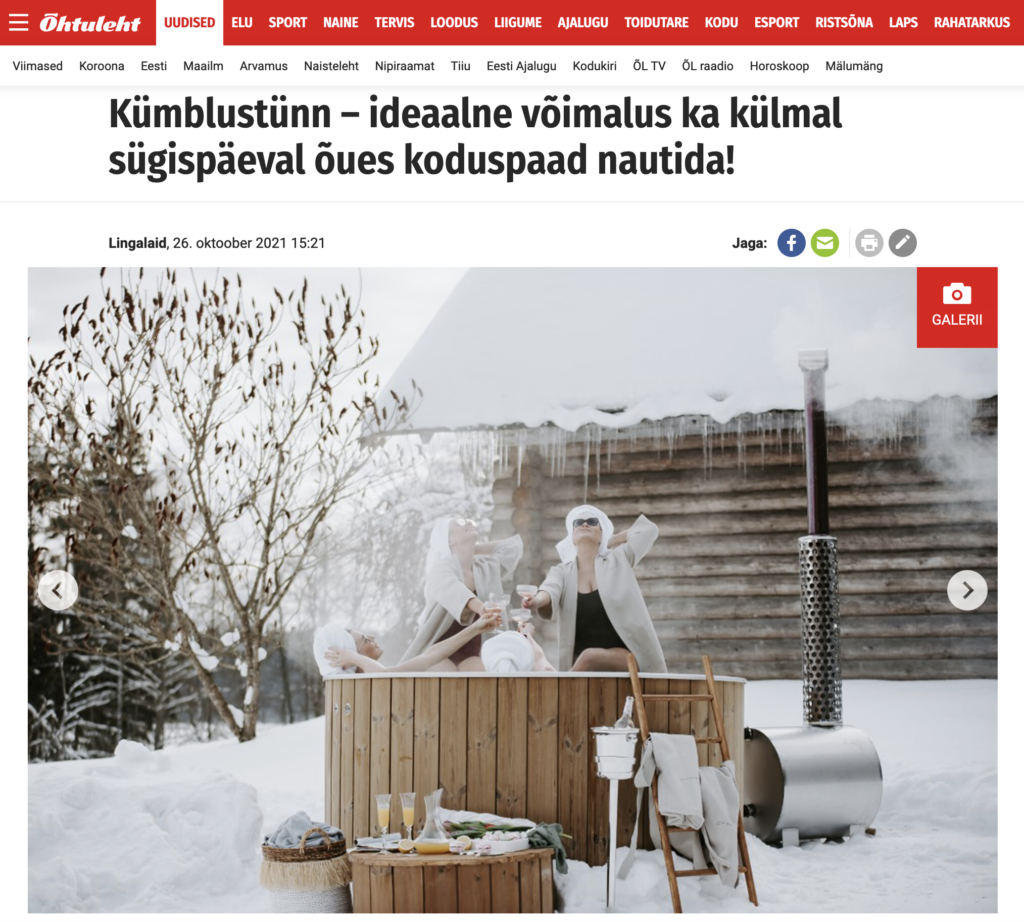 Granted, this article in Õhtuleht appears to be a case of “native marketing” – not an actual news article. But I still found it very enlightening.

So, this is how women enjoy hot tubs in Estonia!

They turn it into a home spa with their girlfriends. Sipping sparkling wine and getting drunk on nutritious fruit cocktails in the middle of the day. Dressed in matching swimsuits, towel-wraps for the hair, and sunglasses to protect the eyes from snow-blindness (?).

When I showed this photo during my workshop at Tallinn Feminist Forum, protests from the audience arose:

“We don’t drink sparkling wine in the sauna. We drink beer!”

“Why do they have so much clothes? You’re typically naked in the sauna or hot tub.”

“Why is it gender segregated?”

Good question! As the article itself points out: “the barrel sauna, which is also widely known as a hot tub, is not only for women and their beauty rituals …”

OK. So how do men bathe in hot tubs? 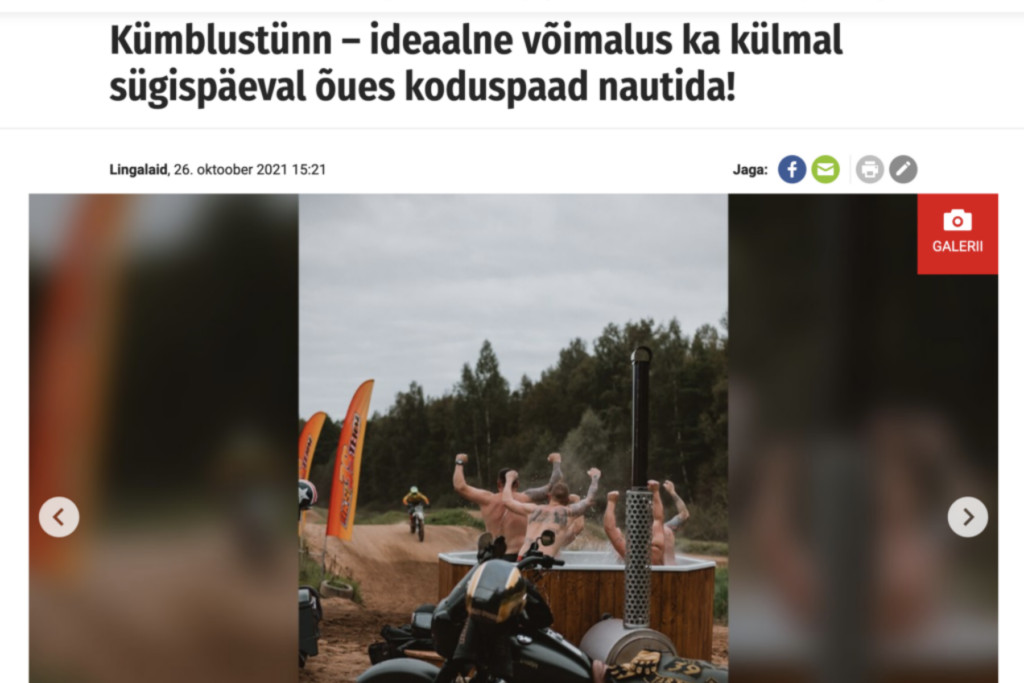 This is the answer! Men pull up the hot tub right next to their private motocross track. Where they also park their motorcycles. Because men need something else to look at, so they don’t accidentally make eye contact, stumble into a meaningful conversation, or – God forbid – catch a glimpse of each other’s tattooed bodies.

Out of both these suffocatingly stereotypical hot tubs, I personally think this one looks most like a nightmare to sit in. At least sit down in the fucking bathtub! Or is it gay to relax?!

2. When the price of electricity goes up, the number of cakes being baked goes down 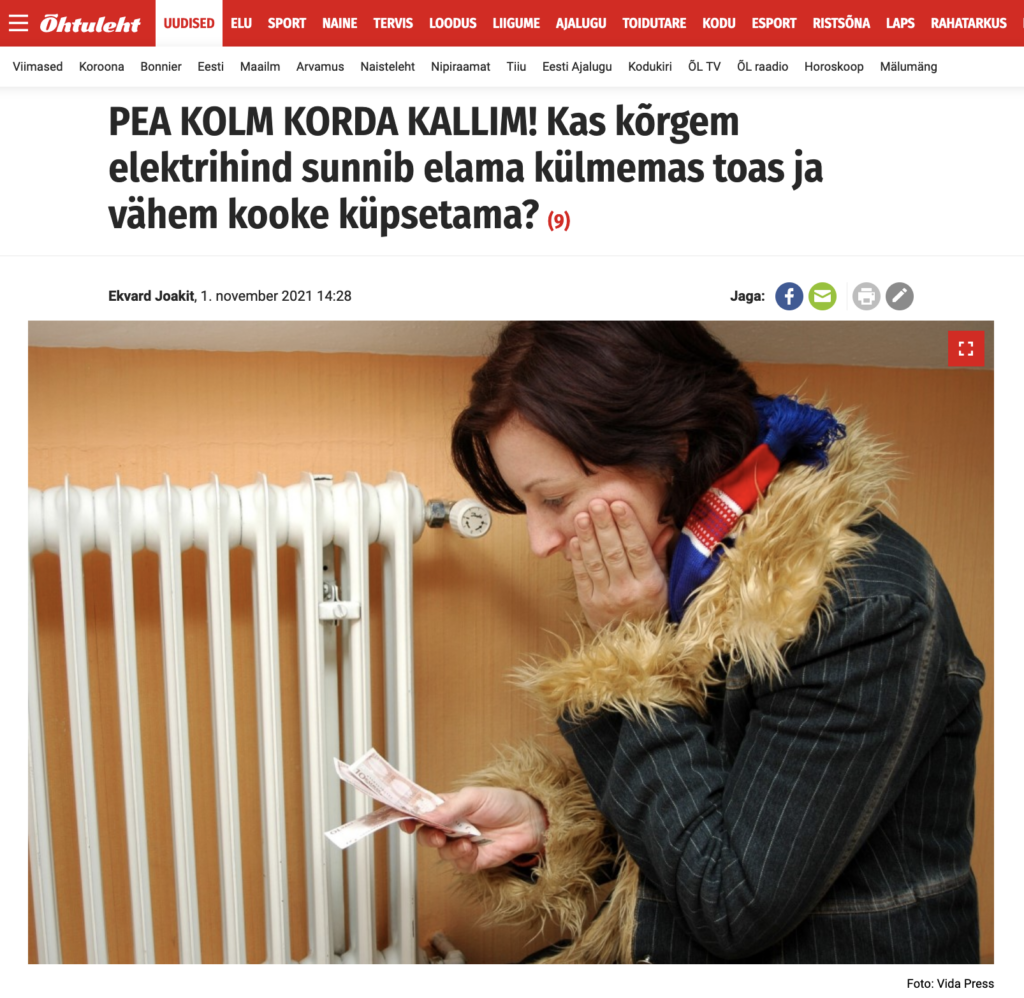 I can’t tell if this photo – selected for this article about the ongoing energy crisis – is intentionally hilarious or not.

It reminds me of the anonymously run Swedish blog called Local Newspaper Disappointment, which collects news photos with imagery exactly like this: a person looking visibly upset, next to the cause of worry. In this case: a cold radiator (judging by the fur coat). And a bundle of banknotes, that’s too thin! 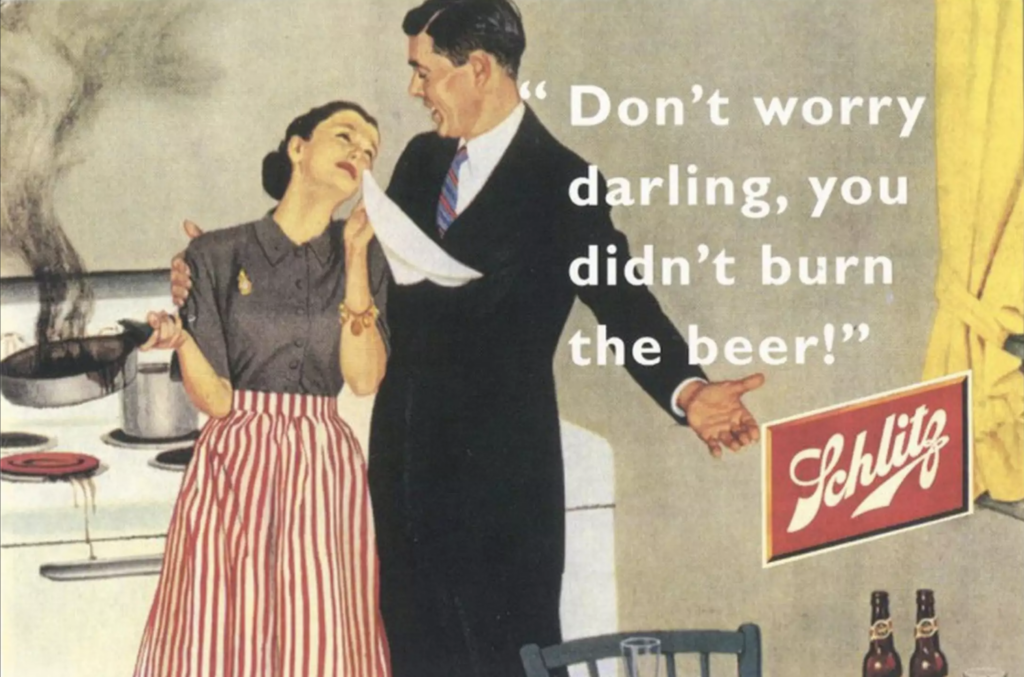 It’s a very literal way to illustrate a problem. But if we look beyond style and focus more on gender messaging… Why is it a woman in particular that’s kneeling in front of the radiator when the heating goes? Why not a man?

The stereotype-cementing implication of the image is that it’s women’s job to run the home, with its energy-devouring household appliances. And to make sure there’s cake on the table. (And this woman failed!)

Because yes, the headline is actually, for some reason, talking about cakes: Does a higher electricity price force you to live in a colder room and bake fewer cakes?

3. Daddy likes to hide behind the pinewood panel 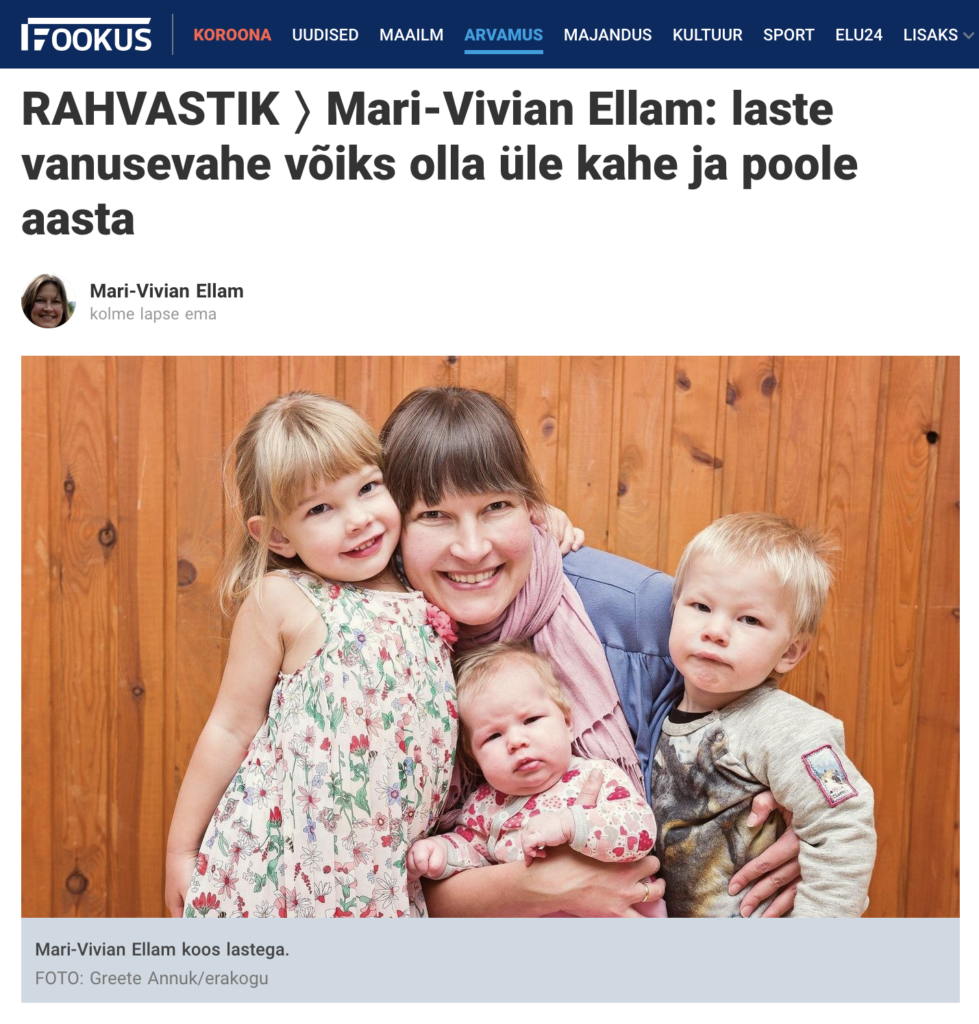 First of all, I wanted to make sure I wasn’t being heteronormative… the writer of this article appears to have a husband. Too bad he couldn’t make it in time for this lovely family portrait!

In all seriousness, what bothers me about this article is not the photo, nor the headline, nor anything else present in the actual article. It’s the absence of similar columns written by men.

Three out four experts in European news media articles are men, according to the 6th Global Media Monitoring Project (GMMP 2020). But when it comes to one subject, men take a step back from the role of authoritative source: what to do about kids.

If Postimees wanted to contribute to gender equality, they could let more men air their personal opinions, or review the latest research, about parenting. Seeing more men talking confidently about, for example, the advisable age gap between the kids in your litter, could inspire more men to dare to shoulder more responsibility as caretakers. Or just not assume that Mother sits on all the answers. Which, in turn, could free up more time for women to answer the call from the news media to give their expertise on other subjects than kids.

4. When men are happy, you can really tell 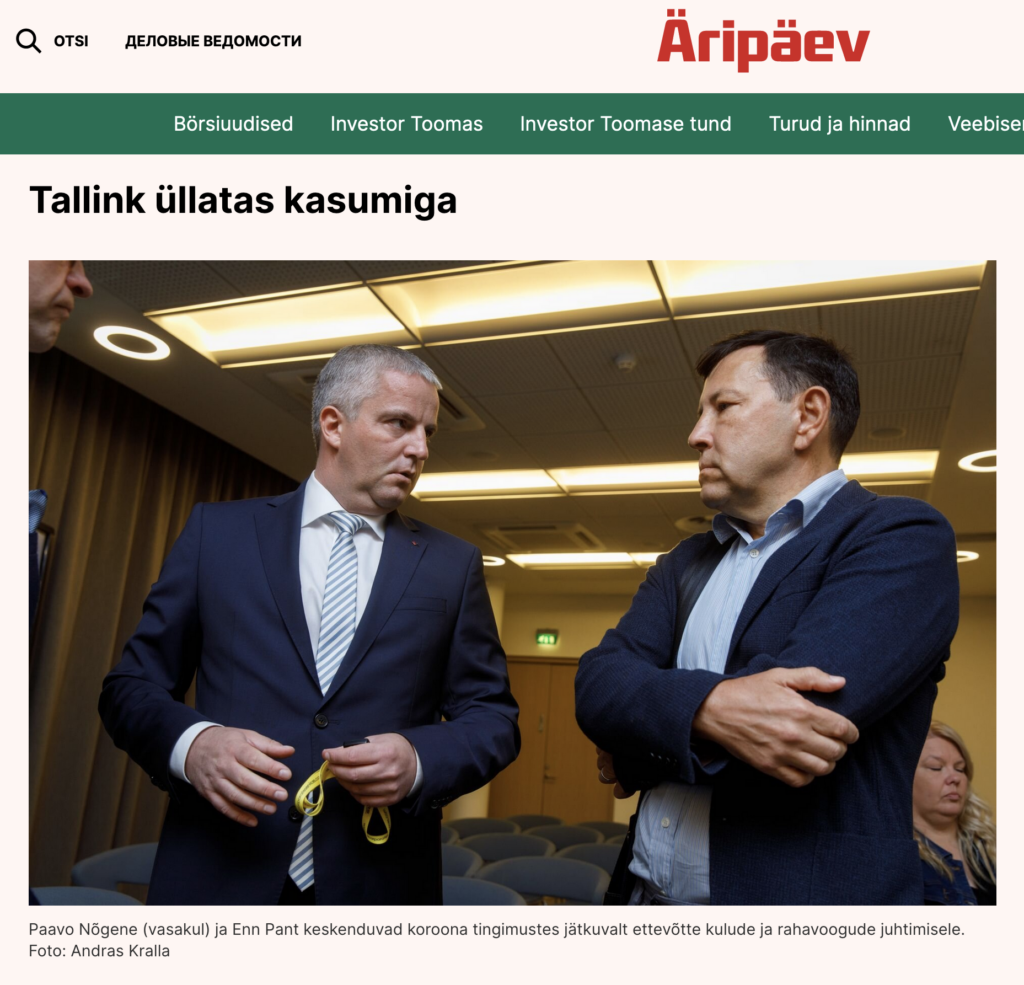 Hey, Tallink made a profit! A nice surprise, judging by the article. And look how happy that makes Tallink’s CEO Paavo Nõgene and major shareholder Enn Pant.

Much can be said about how women are objectified, sexualized and dehumanized in mass media. But what’s rarely talked about is how men are dehumanized, in that they’re not allowed to show the whole register of human emotions. At least when the camera comes out, the emotional expressions available for men are pretty slim.

But of course, this photo in particular is also an image that conveys power. Even if you didn’t know who these two alpha-cats were, you would know they’re important. Two stonefaces exchanging information. Photographed from a low camera-angle; a time-tested method of enhancing someone’s symbolical power (think propaganda), making the person look bigger, more dominant, more impressive.

They’re also enacting the most common gender pattern in the media. That men are portrayed as active – not passive, or posing. The boss to the left is even in movement, perhaps going in for an awkward handshake.

To highlight these men of action’s alertness even further, there’s a woman in the background taking a nap.

5. Women don’t take up much space, they’re practical that way 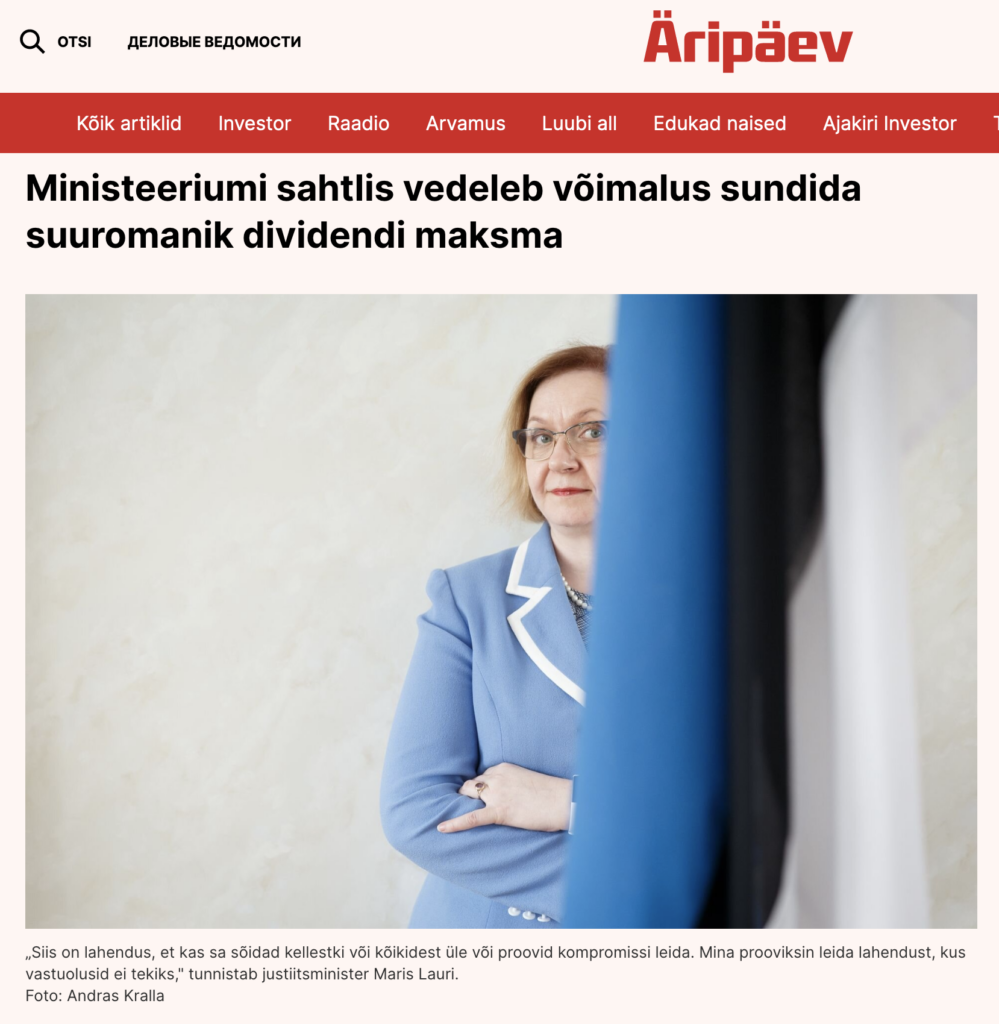 Unless he has been involved in some kind of scandal, I have a hard time seeing a powerful male politician being portrayed like this.

I call this kind of photo “the peek-a-boo pic”. Where women peek out between piles of books, around corners or from behind trees.

It’s a shame because if the photographer would just take two steps to the left, if Estonia’s Minister of Justice Maris Lauri wasn’t half-hidden, it would probably look like something of a power portrait. Arms crossed. Standing tall. Intelligent, inquisitive gaze. Too bad she had to be blocked by some blue, black and white cloth.

Peek-a-boo! I see a Minister of Justice! 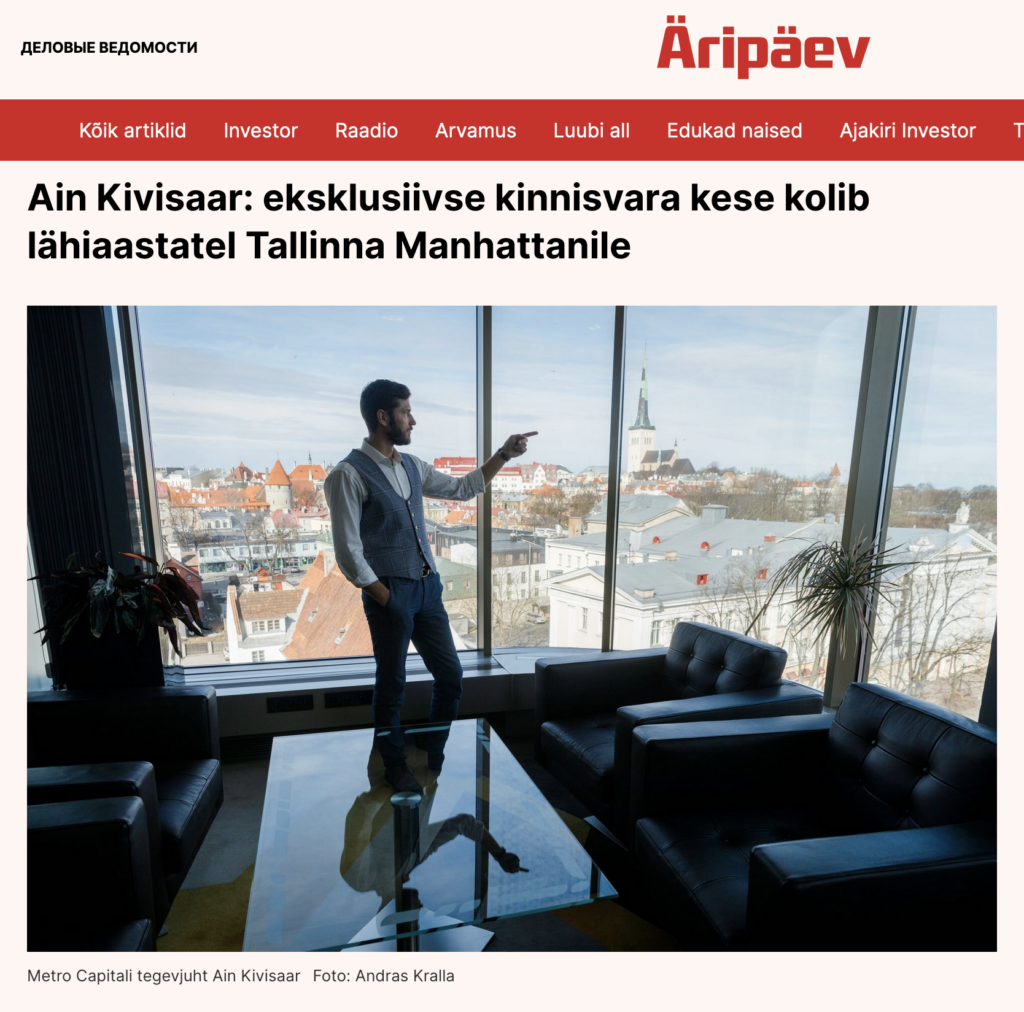 He just stood there in silence. Looking out the panorama window of his empty corner office. Then, after forty minutes, he lifted his finger and said: “There, on top of the church, I’m going to build a barrel hot tub.”

7. A norm-breaker can never truly escape the norm, and an image can always undermine a thousand words 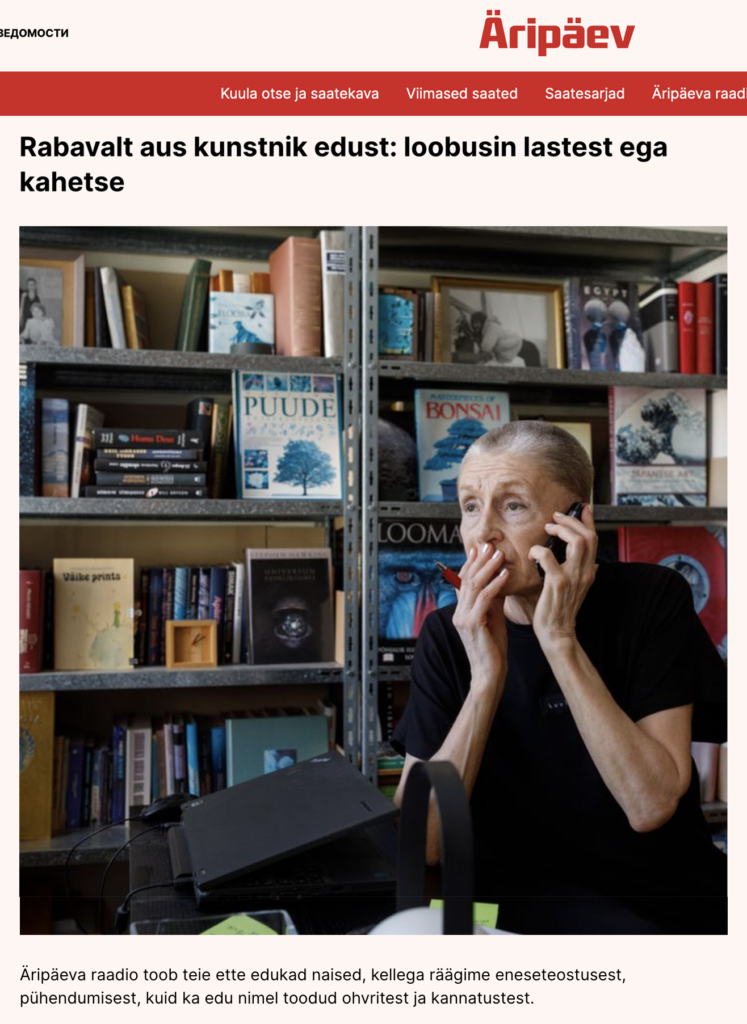 The successful Estonian painter Sirje Runge has made the decision not to have kids, in order to pursue her career as an artist. And – according to the headline – she does not regret it.

But that’s not the story the photo wants to tell. In it, Sirje Runge is captured with a hand covering the mouth. Eyebrows raised. A phone in her hand, tightly held to the ear (like she has just received some bad news). And a facial expression that body language experts would tell you signals surprise, chock, worry, or regret.

To make matters worse, there’s no trace of Sirje Runges art in the photo. Not a necessity when you portray an artist, of course. But to an article that’s supposed to convey her message of being fine with the absence of kids, and to illustrate her success and achievements as an artist, she looks, after all… quite alone.

The very existence of this interview is norm-breaking. Hearing the story of a woman who has withstood the pressure from society, media and norms to have kids, and to live childfree (as opposed to childless), could be ground-breaking for someone who themselves might feel that child-rearing is not for them.

Sirje Runge is also, as she points out in the article, a norm-breaker in that she’s a 70-year-old woman and still visible to the media. Only 3% of all women in the news are between 65 and 79 years old, according to GMMP2020, while 15% of all men figuring in the media are in the same age group. A phenomenon called gendered ageism.

But, as norm-breaking as this article and interview is, it’s not norm-critical.

Why must women – in interviews about their merits, professional skills or artistic ambitions – constantly be reminded of kids? (Regardless if they have kids or not.)

Why are successful men seldom asked the same questions? Aren’t men typically the ones that too late in life realize that they’ve sacrificed family life and close relationships with their kids on the altar of their career?

Would it be described as striking (“rabavalt”) – as the headline puts it – if a male artist confessed that he chose work and prestige over having kids? My guess is that such a headline would look pretty foreign to us, regardless of whether we live in Estonia or if we sit a Baltic Queen-trip away and judge Estonian news magazines from afar. Since the world isn’t equal.

Let’s say the world-famous Estonian composer Arvo Pärt by choice didn’t have any kids. (He has two.) Or better yet, if the legendary Swedish film director Ingmar Bergman didn’t have nine kids with five different wives. But let’s go with Arvo, since he’s alive. Would the photographer assigned to portray the artist get the idea to ask him to look out of the window with a regretful gaze?

“Arvo Pärt, phone for you! It’s your non-existent kids calling.”

Transgender people in Estonia are aware of what awaits those who turn to psychiatrist and sexologist Dr Imre Rammul, head…
Nika Nazarova’s lovely cartoon is about internalised misogyny, or the desire not to be like other girls, and the journey…
I identify as transgender, specifically non-binary. So you’d think I am well-versed in gender theory. However, every time I think…
Cart
Checkout - €0,00